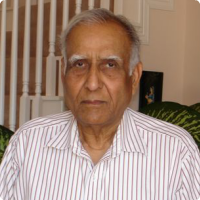 Shri Prabhakar B. Ghate, known to many as “PBG,” hails from Dharwad, Karnataka (India). He came to the U.S. in 1958 as a Fulbright Scholar after graduating from Karnataka University with high honors. After completing his Ph.D. in 1962, he joined Cornell University, where he pursued a career in research and teaching until the summer of 1966, after which, he moved to Dallas, Texas to begin his 28-year distinguished career with Texas Instruments.

When PBG first came to Dallas, there were hardly 50-60 people of Indian origin in the area. He soon began serving on the board of the local Indian cultural organization—delivering presentations on sanatana dharma at churches, educational institutions, and interfaith gatherings—and became a founding member of the local temple.

Over the years, PBG attended several camps and courses conducted by Guruji Swami Tejomayananda, and in 2005, he joined the two-year, residential Vedanta Course under Guruji’s tutelage, at ‘Sandeepany Sadhanalaya’ in Mumbai, India. During the course, he passed with distinction Bharatiya Vidya Bhavan’s Kovid Sanskrit examination. After the course ended in 2007, he returned to the U.S. as a Chinmaya Mission Acharya and continues to serve at CM Dallas Forth-Worth.