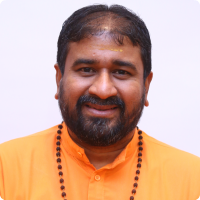 He was initiated into the holy order of sannyāsa in 2003 by Pujya Guruji, Swami Tejomayananda, the Head of the Chinmaya Mission. While he served the Mission initially at their Centres at Kodaikanal and Trichy, Swami Advayananda took charge of Spiritual and Cultural Education at the Chinmaya International Residential School (CIRS), Coimbatore in 1996. After sculpting the lives of a generation of young adults, he became Acharya of the Sandeepany Vidyamandir** in 2000 and conducted the Vedanta Course in Tamil and English for young monks.

Since 2003, at CIF, the Research Wing of the Global Chinmaya Mission, Swami Advayananda has overseen a significant expansion in the research publications and Home Study Courses of CIF. An accomplished teacher of Vedānta, with many Gītā and Upaniṣad JñānaYajñas to his credit, Swamiji has authored several books such as the Holy Gītā Ready Reference, a course in Advanced Vedānta, and research articles titled‘Vedanta Unveiled’, a series of articlesin Tapovan Prasad. He has also edited Vedāntic works in English and Sanskrit including the Foundation Vedānta Course, a course in Bhagavad-gītā, Īśvara-darśanam and Sūktisudhā.

Swami Advayananda was part of the team that researched and coordinated the Upanishad Ganga (a Doordarshan teleserial) produced by Chinmaya Creations. He also served as Ācārya of the 15th Vedānta Course at Sandeepany Sadhanalaya, Mumbai. Most recently, Swamiji has overseen and co-redacted the publication of the 2-volume Brahmasūtra-catussūtrī-śāṅkarabhāṣyam, a profound and student-friendly English translation of the Ādi Śaṅkarācārya’s commentary on the Brahmasūtra with a detailed exposition that is extensively footnoted from 10 sub-commentaries.

* Sandeepany Sadhanalaya is the premier Institute of Vedantic Learning of the Chinmaya Mission in Mumbai.

** Sandeepany Vidyamandir is the Gurukula of the Chinmaya Mission at Coimbatore.