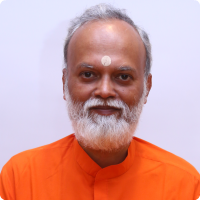 Swami Chidatmananda is a Law graduate from Osmania University. Inspired by Swami Chinmayananda, he joined Sandeepany Sadhanalaya in Mumbai in 1989 under the tutelage of Swami Purushottamananda.

Swami Chidatmananda is popular for his talks on India’s widely viewed cable TV channels (Gemini,Teja and Doordarshan), where he covers topics such as the Bhagavad Gita & Vemana padyamulu (poems by the Yogi Vemana). He also speaks on Vedanta (Upanishads), Ramayana and Mahabharata.

He has conducted many Spiritual, Meditation, Management and Personality Development camps for Youth and Elders. Apart from these activities, Swamiji has conducted many sessions for government organizations, management schools and politicians in India with discussions on stress and mind management, self-management, ethics, and morals. Swamiji is acclaimed for his ability to unfold very complex concepts from Upanishads with ease. He is fluent in English and couple of Indian languages.

Swamiji has toured widely internationally for the past several years – USA, Canada, UK, France, Oman – and has endeared himself to a variety of audiences with his, lectures on vedanta philosophy and meditation sessions.