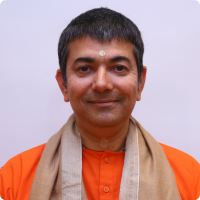 Swami Prakarshananda, an alumini of Sandeepandy Sadhanalaya, Powai, Mumbai, comes to Delhi with an illustrous record of service to the Chinmaya Mission. A Veterinary Doctor by profession, he worked at the Bombay Veterinary Collage as an Assistant Professor for seven years. During this period he mastered the principles of Yoga by undergoing an Advanced course from the Mumbai University.

Exposure to the chanting of Sanskrit mantras through the Yoga training, was a transforming moment in life. As a result, Swamiji joined the Chinmaya Mission’s Vedanta Course and underwent an intensive two-year monastic training through the study of the Scriptures.

There, then arose a strong commitment to devote his life to propagate Vedanta, which resulted in his being initiated as Brahmachari Prahlad Chaitanya. He served at the Chinmaya Mission Madgaon, Goa, from 2004 to 2016 and endeared himself to the members there. In 2014, on Shivaratri, he received Sanyasa Deeksha with the new name of Swami Prakarshananda.

During his inspiring tenure in Madgaon, (2004 – 2016) in addition to supervising and growing all the grassroot activities of the Mission, Swami Prakarshananda:

A dynamic, spiritual guide with command over Hindi, English, Marathi and Sanskrit, Swami Prakarshananda has a simple style and a practical approach to life. His explanations adorned with examples from day-to-day living, make even difficult subjects interesting, appealing and easy for all ages to understand.