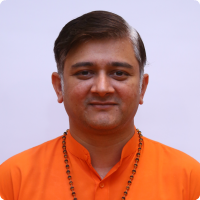 Swami Swatmananda is one of the most dynamic leaders of Chinmaya Mission.
Currently posted at Chinmaya Mission-South Mumbai, he completed the Vedanta Course from Powai from 1998-2000 after his graduation in Commerce and software engineering.

He has been serving in Chinmaya Mission Mumbai since 2000.

He expounds the philosophy of Advaita Vedanta through talks on the Bhagavad Geeta, Upanishads and other texts of Vedanta & bhakti through camps, meditation retreats, interactive sessions and discussions for youth & adults.

He inspires the youth with dynamic spirituality, encourages them to think & question. Various mediums like theatre plays, treks, outdoor experiential learning programmes, music etc. are used by him.

He has also taken the Youth Empowerment Programme(YEP) which is a value-based leadership programme for youth who want to serve the Nation & Culture, where the youth were trained for 3 months and the youth served the country for 9 months.

Several corporates like Piramals, Reliance, Mahindra & Mahindra, Tata Motors, Toyota, PwC etc. have been addressed by him.  He holds weekly discussion groups on the Bhagavad Geeta for some of the top industrialists of India.

He also has conceptualised and executed the first outdoor vedantic vision park called “Chinmaya Pradeep” based on the life, vision and work of Swami Chinmayananda. It is a one of its kind outdoor park which also exhibits the essence of Hindu culture, Geeta, Upanishads in a unique and innovative way.

His simplicity, foresight, peaceful nature and a balanced approach endear him to everyone.