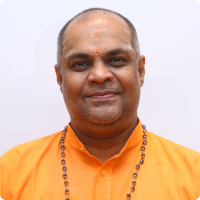 Swami Sharadananda joined the 2002 batch of the Vedanta Course under Swami Iswarananda at Sandeepany Sadhanalaya, Mumbai.

A post graduate in Advaita Vedanta, he ranked first at an All India level and was awarded a gold medal from the prestigious Sanskrit University, Rashtriya Sanskrit Sansthan, New Delhi..

Swamiji assisted Pujya Guruji Swami Tejomayananda as the Sanskrit Acharya in the 13th Vedanta Course Batch at Sandeepany Sadhanalaya. A year after this batch, Swamiji was the Acharya for the Purohit Course (batch of 2010) at Chinmaya Gardens, Coimbatore. This eloquent, erudite and versatile Acharya was again appointed Upacharya for the 15th Sandeepany Vedanta Course (Batch of 2013), where he mesmerized his students with his evening classes on the Srimad Bhagvatam and also gave them excellent grounding in Sanskrit.